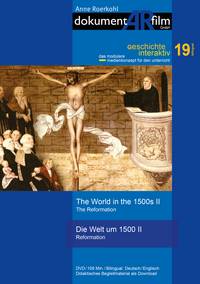 Luther in Privat – The Reformer and Katharina von Bora

From module 5 of the DVD
Martin Luther and the Reformation

The “Lutherin” is what Katharina von Bora often comes to be called. In 1525, the runaway nun marries the church rebel Martin Luther and, for him, she becomes a major support. For not only does she care for the children and the household, as a capable businesswoman, free from financial concerns, she enables him to advance his reformatory cause. And as a clever and educated woman, she even takes part in the scholarly discussions in the Luther home - unusual behaviour and a privilege for a woman of those times.

As a child, Katharina von Bora is sent to a convent to be educated. At 16, she becomes a nun. Before her lies a strictly regimented life, characterised by prayer, work - and celibacy. Yet the world around her is in upheaval. With his theses, Martin Luther changes the prevailing paradigm from the ground up. He also questions the sense of monastic life which, he maintains, is not sanctioned in the Bible. On the contrary, there it states, “be fruitful and multiply!” And none shall be excluded without need. It is therefore wrong for priests, monks and nuns to bind themselves to a life of continence and celibacy. The corresponding vows are invalid, as it were, and can even be broken. Luther proclaims all this in his manuscript “On married life” - a tract that Katharina von Bora, too, has read.

She lives in the Cistercian Convent of Marienthron in the Saxon town of Nimbschen. She stems from a family of the petty nobility. In the convent, she learns to read and write, some Latin and something of medicine and housekeeping. She is a clever woman and, thanks to the convent education, able to see beyond the horizon of the convent walls. Thus in 1523, she takes a dramatic step and flees the convent. Helped by none other than the reformer Martin Luther himself, who sends a wagon. Together with eight other nuns, she reaches Wittenberg.

Martin Luther regards marriage as the holy state ordained by God for every adult. Women, most of all, should be married, early and quickly. So he concerns himself with getting the runaway nun safely wedded. Only with Katharina von Bora that doesn’t seem to be so easy - at least not right away. A student she wants to marry is unable to obtain his father’s permission. Luther seeks to couple her with a pastor of his acquaintance, whom she rejects out of hand. Quite an extraordinary move for a woman of the 16th century. Katharina von Bora is described as far too wilful by those around her - Luther included.

Nevertheless, in the end, it is Martin Luther himself who pops the question. The reformer is meanwhile 41 years old and afraid that he will die before siring offspring. And Katharina, the only runaway nun as yet unwed, shall finally be redeemed from the sinful state of celibacy. They marry in 1525. Hardly a love match, more a marriage of convenience. But that is to change. Over the years, love grows between the “starry-eyed idealists”, Martin Luther and his “warrior woman”, Katharina von Bora.

Everyday Life in the Luther Household

An effective balance of the workload is soon established in the Luther household. Martin is responsible for “God and the World”, while Katharina deals with the reality of daily life, and brings order into the messy bachelor abode. The couple will bring six children into the world. And Katharina develops into a capable businesswoman, who soon generates more income than the reformer with his salary as a professor. She does so by taking advantage of the spacious Luther home, the former Augustinian Monastery in Wittenberg, ceded to him by the Prince Elector of Saxony.

Katharina turns it into a lucrative hostel for students and other guests - with full board. Martin Luther is world renowned. This attracts guests from near and far. It’s like a carnival, they say. Up to 50 people are in the house every day. Apart from the large family, servants, maids and guests must all be provided for. And all that is managed by the “Lutherin”. Katharina brews her own beer and has a wine cellar built. That many people in the house need space. The monastery is extended. Katharina oversees the building work. Apart from that, she looks after Luther’s surrounding estate. She decides when and how the money is spent. Luther, obviously as master of the house, just has to sign and, anyway, women in those days are hardly allowed to make any independent decisions. Tellingly, Luther writes to a cabinetmaker, “Kathy said I should order a chest”. On another occasion, he refers to Katharina as his “Lord”, a title which Luther means affectionately.

With the hostel, their country estates, large herds of livestock, and the professor salary, the Luthers are among the most prosperous families in Wittenberg.

His reformatory manuscripts have brought Martin Luther world renown, but no additional income. Sitting beside the students at his table, are prince electors and dukes, together with the household staff.

Martin Luther and his wife Katharina have six children. Although they are well cared for and no one must go hungry in the Luther household, two of them die very young - as in many other families, too. Only every second child in these times grows to adulthood. This is due to insufficient or unbalanced nutrition, a lack of medicine, hygiene and infectious diseases.

Katharina von Bora and Martin Luther are married for over 20 years. In 1546, the reformer dies. Although he has appointed her sole heir in his will, there are hard times ahead. Only a few months after Luther’s death, the Smalkadian War breaks out between the Protestants and Catholics. Katharina must flee Wittenberg, only able to return in July 1547. The hostel business doesn’t do so well without Martin Luther as the main attraction. In 1552, Katharina must again take flight - this time from the Plague. En route to Torgau, she meets with a serious accident and dies of the consequences that same year. Her gravestone stands in the Marienkirche of Torgau. Today, her former home, the “Lutherhaus” in Wittenberg, is a museum and thus the central memorial to the life and times of the reformer Martin Luther and his “Lady Kathy”.